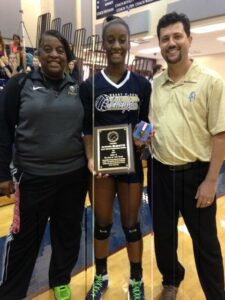 The Varsity Volleyball team qualified for the GHSA State volleyball tournament for the first time in Mustang volleyball history, contributing to the success of the MVPS Athletic Program.
Starting the season with strength, the Varsity Mustangs went undefeated in the Mt. Pisgah Invitational tournament. Recently, with dramatic wins over Galloway (29-31, 25-18, 25-20)  and Pinecrest (25-22, 26-28, 25-20), they advanced to the playoffs.  The Pinecrest victory was particularly rewarding, as it is the first time that our ladies have defeated this rival, tying for third in the region.

The Varsity Volleyball team is just that.  A team.  All of the girls have contributed to the stellar season, but perhaps none more so than newly crowned Region Player of the Year, Autumn Burnette. Burnette has been a force, both offensively and defensively this season and her selection as Mount Vernon’s first ever Region Player of the Year is a reflection of all the hard work she has put into her game.  Autumn knows that none of her individual accomplishments would be possible without her coaches and teammates – in her own words, “I’m honored to win this award and accept it on behalf of my teammates, coaches, family and school. Without all of their support, this would not be possible. We have had a great season, but we have lots more to achieve and we all look forward to playing our best game of the season in the State Playoffs this Thursday.”
Coach Mark Sluzky shares, “Autumn is a dynamic player but an even better leader. She is focused and dedicated, putting forth maximum effort and always leading by example. Autumn never asks for something from the team that she wouldn’t be willing to do herself. She consistently acts as a servant leader and role model for our young team.”
The Mustangs push for a state championship continues on Thursday, October 16 at 6:00 p.m. when they travel to Athens to take on Prince Avenue Christian. Keep up the great work, ladies.  You make us ALL proud!